10 Common Oven Problems And How To Fix Them

10 Common Oven Problems And How To Fix Them

Oven not working? Not heating, heating too much or maybe the door won’t close? These are all common problems with ovens, and thankfully they can sometimes have easy solutions too. Whether its a Samsung oven, LG oven, Rangemaster cooker, Neff hob and oven, Canon combi oven or any other make and model, they can be fixed! 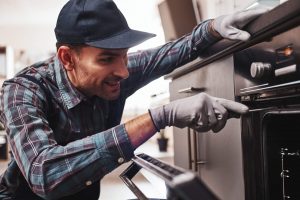 Here are the 10 most common oven problems and what you can do to fix them:

1. The Range Burners Won’t Heat Up

On electric ovens, the range burners need electricity to be able to heat up. From time to time these burners can become worn out and stop working so will need to be replaced.

If your oven door won’t shut, it’s not safe to use. The door is made from many different components so when the door won’t shut it can be one of a few things that are causing the problems. It could be that the oven has broken hinges, broken door springs, the rubber/silicone gasket needs replacing, or it could be the door sensor. If in doubt call an expert to have a look at the cooker for you. 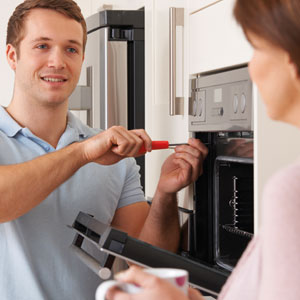 Probably the most common oven problem on the list. The majority of the time an oven that won’t heat is due to a faulty element, alternatively, it could also be a thermostat problem but this is not as common as the heating element. Elements are possible to be replaced by yourself, however, if you don’t feel comfortable doing so, call an expert.

4. The Oven Won’t Heat to the Right Temperature

This could be a problem with one of a few things. It could be the heating element, the thermostat or the temperature sensor. 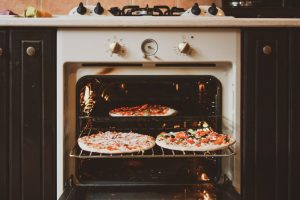 6. The Inside Light Is Has Gone

Like all bulbs, oven bulbs can go after some time. Replacing an oven bulb is the same as any other bulb, however, there will be a bulb cover. A quarter-turn counter-clockwise should allow you to take the cover off and pull out the bulb.

There’s no point having a self-cleaning oven if it doesn’t actually clean itself.

If you’re turning the oven knobs and nothing seems to be happening you will need to check it out. It could possibly be the dial itself, or something behind the scenes. In most cases, the oven knobs are not something you will be able to fix yourself and you will need an expert to sort it for you. Sometimes the dials are connected to control boards behind the front panel of the oven if the knob doesn’t work it can mean the whole board will need to be replaced. Alternatively, it could just be something simple like the springs behind have gone. Either way, you’ll need a repairman.

If you have a gas hob and some of the rings won’t light, you can light the range burners with a match if the electric ignition isn’t working. However, if the burners won’t light, and it’s not the result of an obvious problem like a power outage, you should get it checked out. Gas is not something to be messed with and you will need a gas safe registered engineer to have a look if it is a gas problem.

10. The Oven Timer/Clock Is Broken

Depending on the type of oven it may be harder than it sounds to replace a broken oven timer. Most oven timers and clocks are built-in meaning to actually change it, the front panel of the oven needs to be taken off. The timer and clock are usually connected to a control board behind the scenes. If the part cannot be fixed without changing the board itself then it could be quite costly to replace. Either way, replacing this will require an expert to have a look for you.

Oven problems can be a nuisance, but they don’t always have to cause a headache. Follow simple steps to see if you can fix it yourself, if not don’t worry – engineers will know exactly what to do and will be able to fix it at affordable prices.